Romania, from 19-24 Sep. (117 hours) at well known Sarulesti Lake, which brought the current world record common as well as mirror carp, the world championship in Carp-fishing took place. This championship, with which a team from Japan participated also for the first time, is further the largest meeting in Romania which is now the 4th times delivered. Prize money 55,000 euro + special prices, e.g. the Carp-GPS for the largest caught fish. I was first as a journalist in 1999 at that location, when the opening and victory celebration has been in the parliament of Bucharest, the 2nd largest state building of the world! This year I met the international president of the hunt advice for the preservation of the game and the hunt, Dieter Schramm, who contacted me with the idea about creating a roof federation of the anglers and hunters based on European level. My hobby and occupation platform, fishing, is very important for me, going by I in the last 10 years as a journalist in 5 countries I allways tried to make positive as well as innovative reportings. Particularly companies as fodder production are of the fact dependent that the anglers have good feeling and that they will be able to follow further their hobby without reservation. At present it does not look like the fact, which is Germany concerned, that this would be still the case on a long-term basis.
Restrictions in the fodder quantity, catch delimitations as well as increasing of forbidden fishing zones shows the fact, that the influence of the Greens becomes stronger and by negative publications on the television further the image of the anglers suffers. Other publications such as in one of the latest STERN Magazine (one of the biggest general Magazines in Germany) are very welcome! Is there already a chance?! To place itself hereby, also an appeal against the large fishing companies for future inquiries of functionaries to be in the sense and take positively side to it! The WCC in the Carp-fishing is pursued by Romanian TV-teams around the clock. Daily reporting in the TV, as well as in the Romanian big daily magazine belong to exactly the same, e.g. the attendance of the Japanese Ambassador, the boss of Daiwa Toshi Usuda, which came particularly for this Event and the following ANSPO-Show to Kassel, from Tokyo to Europe, journalists from many countries and above all the participation of 55 crews, which determined the WCC winner 2004 in a fair contest. Starting money per team was 1800 euro, inclusive daily food supply as well as a hotel overnight accomodation after the winner honour in Bucharest. The drawing of the places took place according to a fair principle, according to which each participating team pulled tight a number and afterwards the pulled sequence, each team was allowed to determine its fishing place. Erich Unger, which had caught the world record common carp with 34,3 kg was the Chief Reveree. He gave the lake 80 tidy fishing places apportionable, so that even for the last team still 26 places stood to the free selection.
With his 3 days work, Erich provide a complete sea chart with depth data. This was served to the participants as basis for its decision. All places have been saved with the Carp-GPS on a square metre exactly in order to use all datas later on when the signs of places (red/white straps) are gone. Besides there was the possibility of changing the place on request – only one hand full of teams did this after 2-3 days! The entire captures held itself however unfortunately within limits. Remarkably was the high fish losses of the Romanian winner team who won the match with 77kg complete weight. Boats could not be used. Also others have lost some fish! After our opinion however the use of floats and break lights (fastened at the night to the float) could have prevented the majority of the fish losses. Just think about that a hooked fish freely swim one leaves. As soon as the fish is sufficiently on the left of or on the right of the obstacles, the pulling begins…! The float alone could already have landed some fish more, even with direct pulling – but no one did try this!! However, three large fish went from different teams to approx.. 20 minutes pulling. Unfortunately the largest caught fish brought straight times 16,5kg on the balance.
At present 17 Austrians are accompanied by Kurt Grabmayer, which caught with the WCC two AMUR, but unfortunately only one could be weighed (do not ask why) and Erich Unger, who has been many times at Sarulesti and has never come back under 5 carp in the 20kg+ area, remarkable with its approx. 10 Trips to the Raduta. We will see whether these men will catch larger fish in the two weeks with boat and good assemblies and/or methods, and to eliminate the rumors, it would give no more large fish in the Raduta! With our daily round trips around the lake we saw some very enormous carps at the surface turned. Ardy Veltkamp was likewise locally and spread with its good mood, despite his problems with his leg, much fun its DVD over „The Romania Heavy Weights“ appears shortly on the fishing market. Further News over the Sarulesti and the Danube Delta that-next here..!
Prices: First price: 24,000 euro
second price: 16,000 euro
third price: 10,000 euro
largest fish: 5,000 euro + Carp-GPS
Kommitee: Tournament Director: Max Nollert
Chief Reveree: Erich Unger
agency for France: Phillippe Lagabbe (not appeared)
agency for Holland: Ardy Veltkamp
agency for Italy: Massimo Mantovani
agency for Yugoslavien: Dragan Yovanivic
agency for Romania: Birla Marius & Tarus Victor

Pictures of the WCC:
Take care! 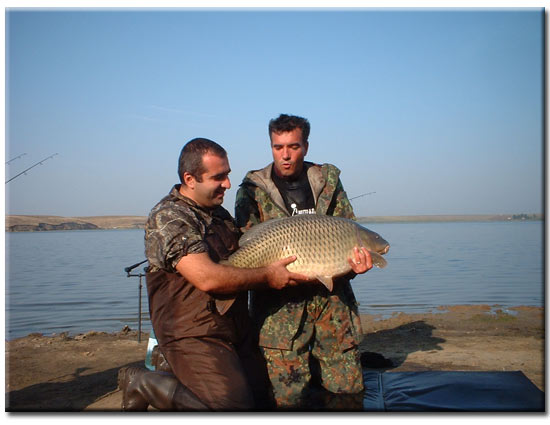 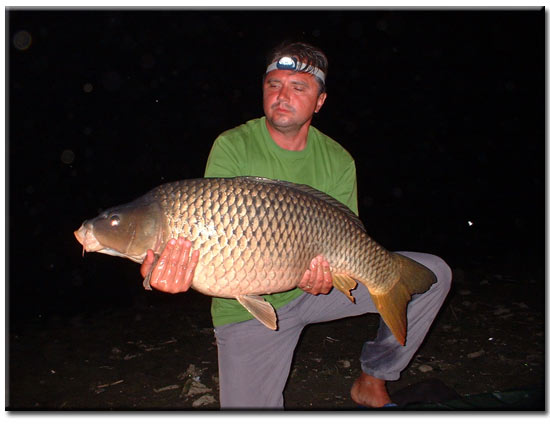 The Daiwateam had for sure the longest way to come! The Team + Jouranlist had 6000 Euro Cost only for their Tickets. The Japanese have their own Carpfishing Magazine which comes out 2 Times a year. Also on the picture: Erich Unger and Ardy Veltkamp. 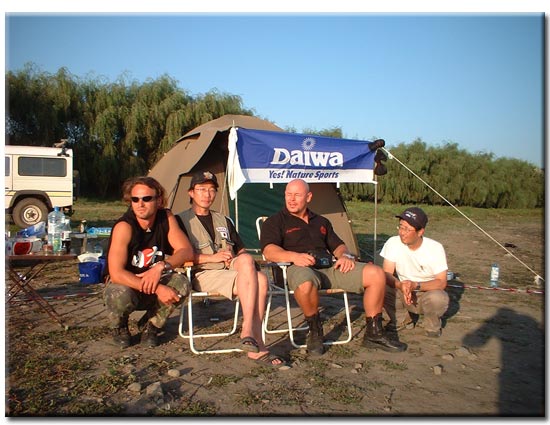 Japan Style! The rods have been Telescorods of 5,2 meter length + Multireels with digital advice of thowing the rig. Costen per rod: 650 Dollar, per reel 280 Dollar 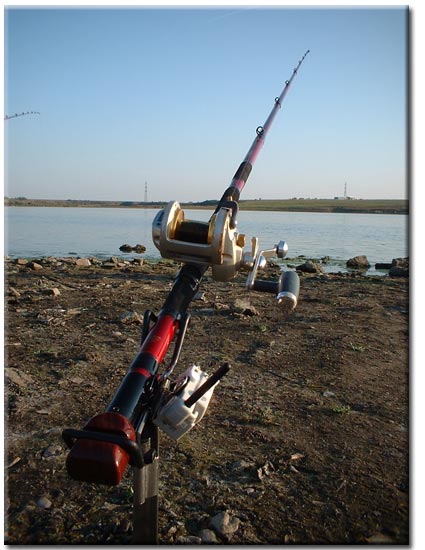 The Place of the Italiens 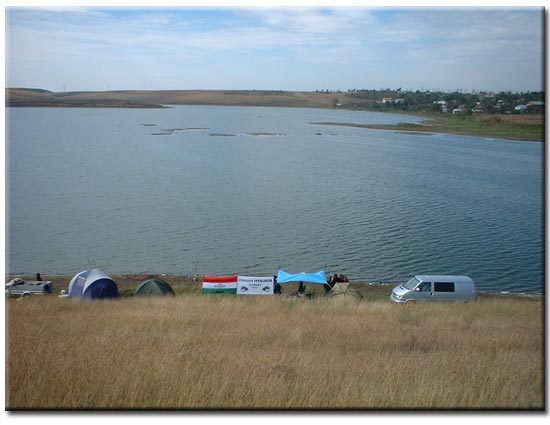 Photosession approx. from the view of the capture. 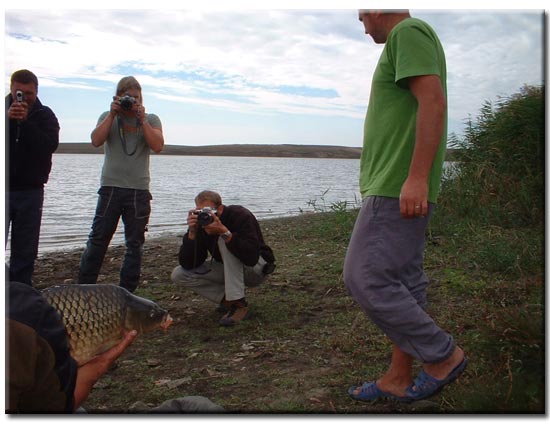 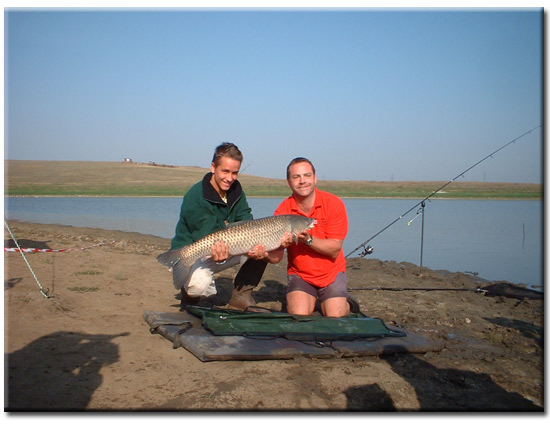 One more fish of the winning Team 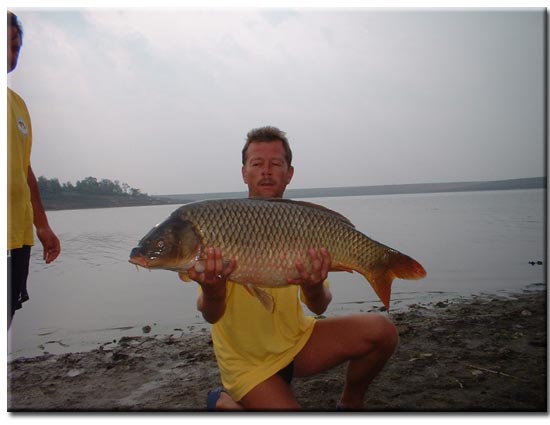 The TV Team of the rumänien 1. channel 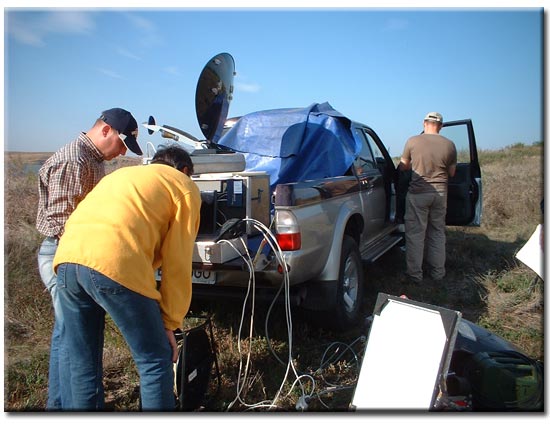 The General Manager for Design & Developement, Toshi Usuda, from Daiwa, came to Rumania, and from there he visited the fishing exposition the ANSPO at Kassel. 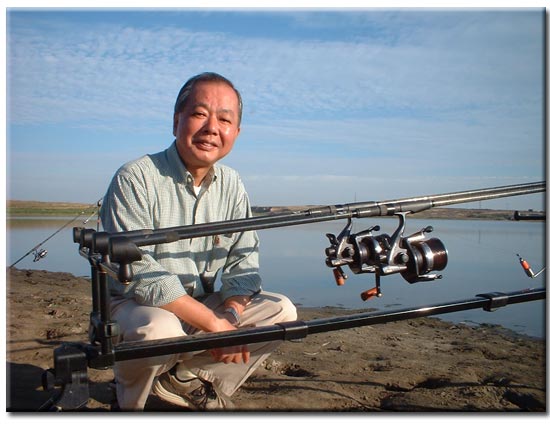 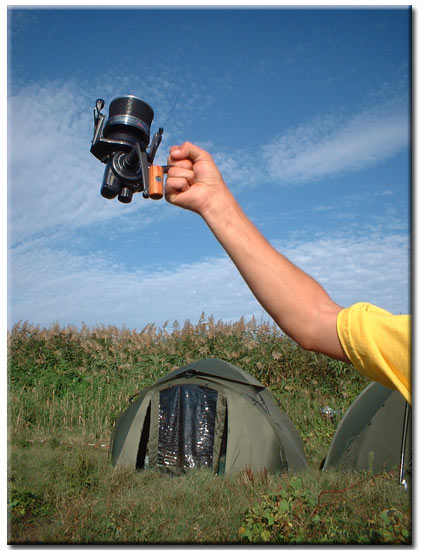 The glory „Rod-Pod“ of the winners 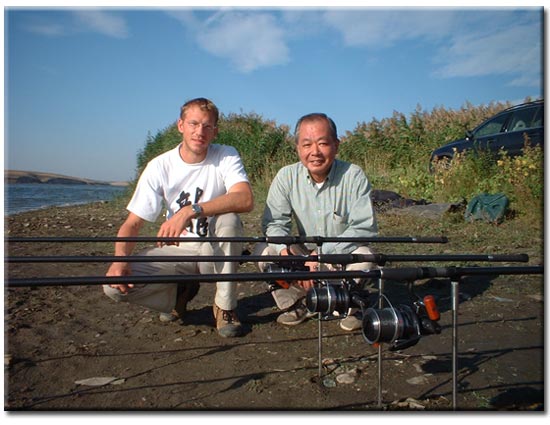 The Japanese have taken the best descision in baits! 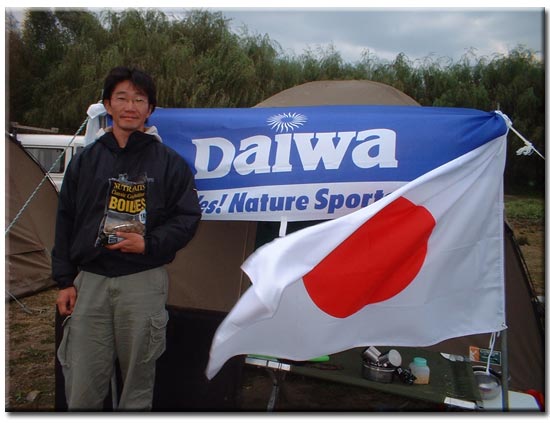 A spezial cooking tent from a team – also they had a specail toilet tent and once more a shower tent!!! 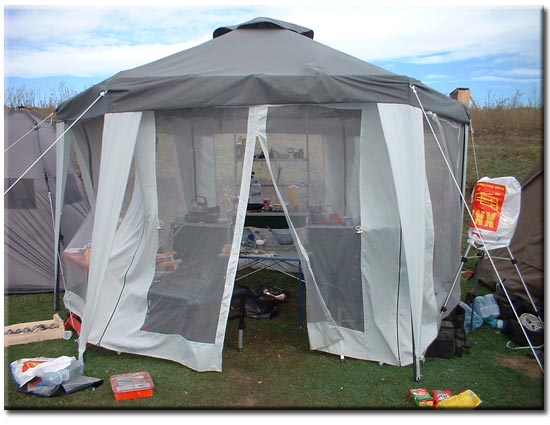 At the end there has been given a 300kg meat by Robert Raduta – bon appetit, Erich 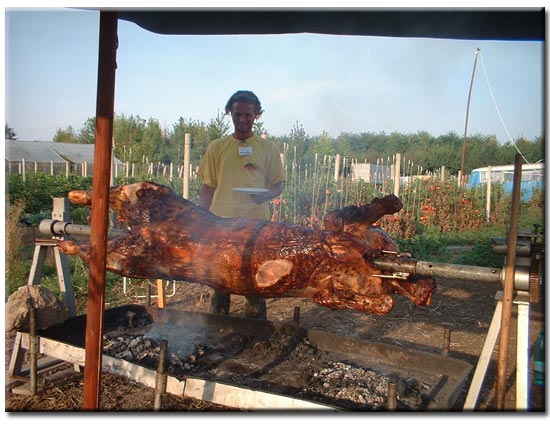 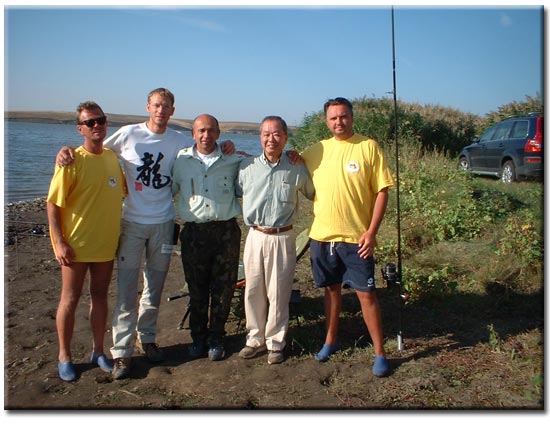 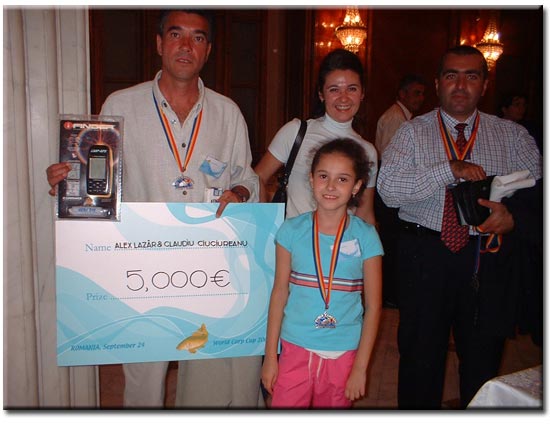 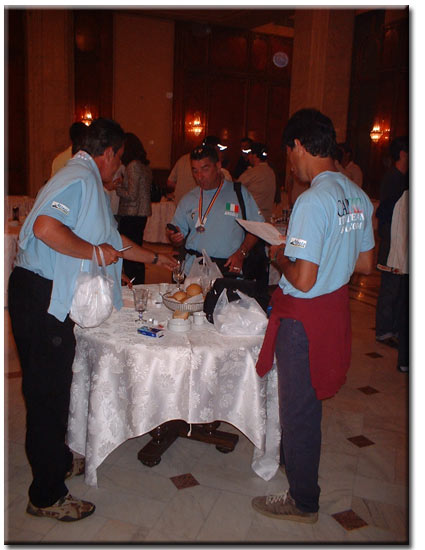 Erich Unger has gone back to the lake already – from him we will here a complete different story about fishing during the next time – the world of carpfishers will open their eyes and mouthes!! 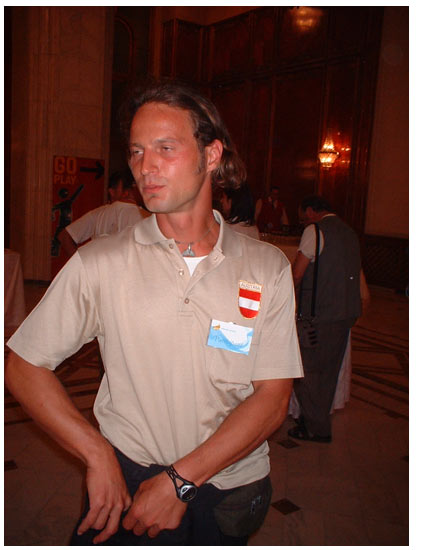